Start a Conversation to Build Engagement 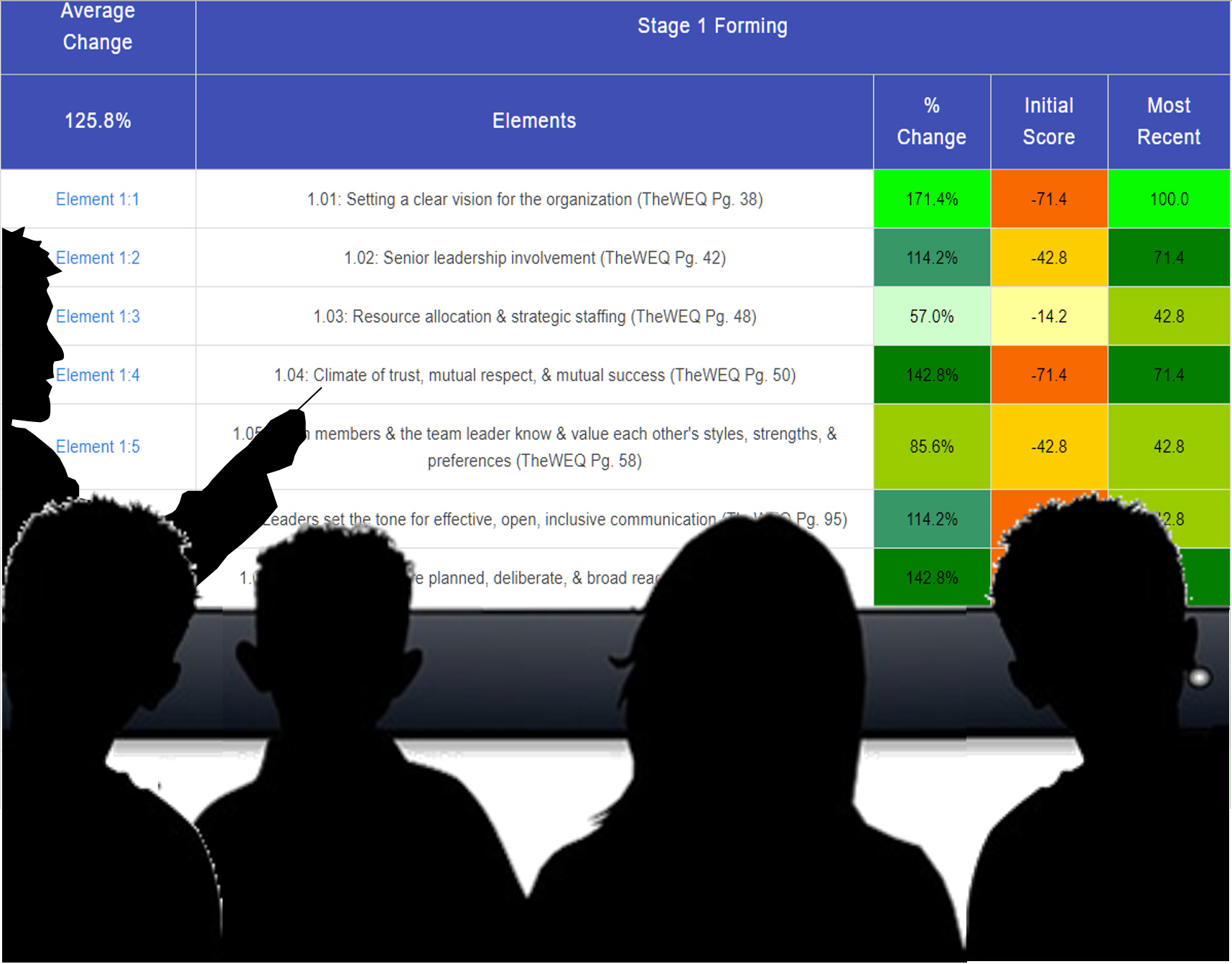 Start a meaningful conversation with TheWEQ 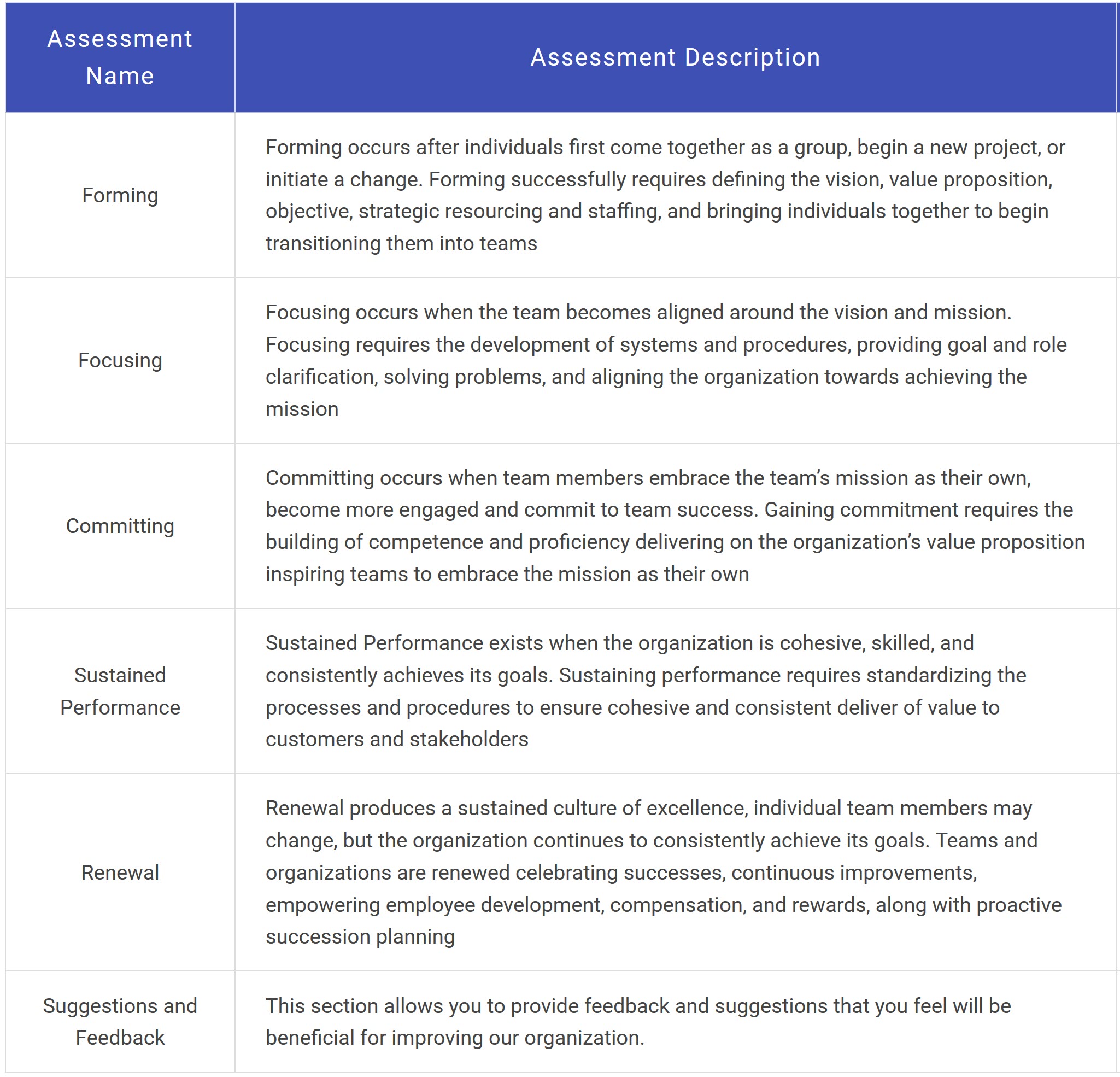 Navigation of each stage requires impactful leadership and effective management. The goals of each stage are shown in this table.

So how do you know how well your teams have navigated each stage? You can’t manage what you can’t measure. Our research has shown that there are 50 Elements that impact organization’s ability to efficiently achieve their goals and establish impactful employee engagement. The 50 elements are grouped according to each stage.

Each member will have a unique perspective on how well the team is performing, how well it is managed, and whether their time is well spent contributing to achieving the organization's mission. To be effective, organizations must maximize alignment of every member's perspective such that the group of individuals pulls together as one collective whole. With everyone having a different view of 50 elements that’s a lot of perception and could be overwhelming. Fortunately, WES has an APP for that.

TheWEQ online assessments allow team members to give anonymous feedback about what is working well and what needs improvement for the 50 key elements of organizational effectiveness. Once your team members take assessments, you’ll be able to see the aggregated responses for all 50 elements in a single Team Health Dashboard:

TheWEQ Dashboard: Your team's health at a glance!

The elements are listed in columns below each stage header. This Overall Average shown in the top left corner (12%) is the average of all input positive and negative. The range varies from +100% (everyone agrees that the element is generally done well or at least moving in the right direction - a very good thing) to -100% (everyone believes the element is not done well, consistently, or not at all – clearly not a good thing).

The dashboard can be shown with or without the element descriptions. Shown above is the dashboard without descriptions; many practitioners prefer this view since it gives you a quick overview in a single glance.

Shown here is a partial view of the expanded dashboard showing the element descriptions.

A portion of TheWEQ team dashboard with element descriptions showing

Clicking on any element reveals a detailed description

For quick access, clicking the "Show" button allows you to drill into the details of each element with examples and explanations on how to successfully achieve each element.

The details of Element 2.05 are partially shown below:

Clicking your cursor over any element reveals a pop-up that describes the element and descriptions of effective and ineffective performance. Here element 2.05, (+60%) is shown.

Each element description is cross-referenced by page number to the Practitioner's Guide for easy reference, training, and mentoring.

Drill deeper into each element

Because we like to provide ready access to ALL the details you need, you can also click on the stage name to access a pop-up that describes the objective for each stage and observable indicators of effective and ineffective navigation of the stage.

The bottom portion of the Team Health Dashboard summarizes the response for all 10 Elements of each stage.

In this example looking at Stage 1 Forming:  28.0% felt their team was well formed, 29.3% felt the team is moving in the right direction, 26.7% felt elements of Forming were not done well or consistently, and 16.0% felt the elements essential to forming were completely absent.

Given the many gaps, where would you focus?

Generally speaking and all else being equal, prioritize your efforts on gaps in the earlier stages. If the team didn’t begin by establishing a clear vision and value proposition (why the team's work is important) everything after that will be affected by the lack of clarity – you can’t build on an unstable foundation!

The Team Health Dashboard gives an overall sense of where there are gaps for all 50 elements. It tells you where to start but you’ll need to drill deeper into the specifics using the Stage Details Reports. You access the detailed report for each stage by clicking on the overall average for each stage at the top or bottom of each column.  If you want to drill deeper into the 14.6% overall score for Forming, simply click.

Access the Detailed Report by Clicking on the Stage Average Score

The Detailed Report shows how participants felt about each essential element

The reports show how many responded, but there is no way to know who responded which way.  All reports are agregated to keep the responses confidential.

To understand the scoring in more detail, the values on the Team Health Dashboard reflect the overall negative responses subtracted from the overall positive responses.  In the example above, 60% of the team felt the overall mission was clear or becoming clear; 40% felt it was not clear and the team was motivated by other factors.

If the team leader worked with the team to clarify the mission, vision, and value proposition, Element 1.01 would improve and the team would be more in line with the organization's overall mission.

To see the team comments for the stage, select the Comments tab on the right:

All reports and comments can be downloaded as either PDF or CSV format.

TheWEQ reports are meant to be used regularly to check on team status and keep track of progress.

The Comparison Reports allow you to compare one period with another to ensure you are still heading in the right direction and no issues are boiling up beneath the surface.

The Comparison Reports also allow you to report out to your team and any stakeholders how the team is doing.

Here we see the team's overall health has improved 38.8% (top right corner).  Every stage has overall improvement.  In fact, 49 of the 50 elements have all shown improvment. Only element 4.09 has scored lower than the previous time the team took the assessments. Progress in stage 4, Sustained Performance, has shown the least improvement.

Like the other reports, we can drill into this element by clicking on the score of interst:

Element 4.09 addresses control of noncorming products and services.  You can drill deeper into this topic to learn more about ways to improve.

Even though element 4.09 shows a decrease, is it where you should be putting your focus?  Let's drill deeper.

Like the other reports, you can drill deeper by selecting the overall score for the stage (26.4% improvement).

Drill deeper by clicking on the overall stage score 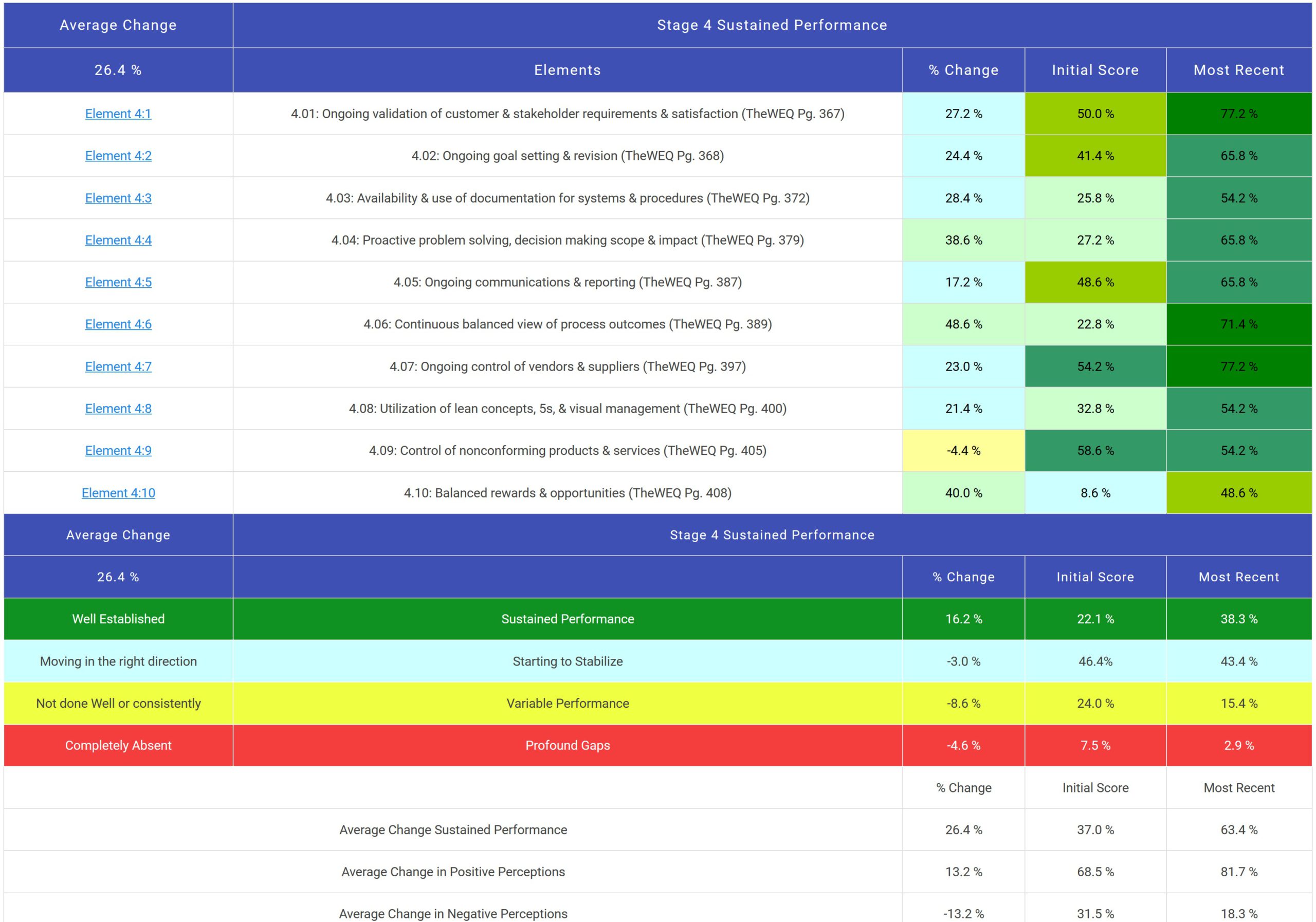 Even though Element 4.9 shows the only decrease, it is not the lowest element so spending more time on resources on it may not be a priority, though you will want to monitor it to make sure this trend doesn't continue.

To determine priorities for the team, look at the most current team health dashboard.

The Dashboard now shows an overall Team Health of +71.% - a great improvement over the original +12%. 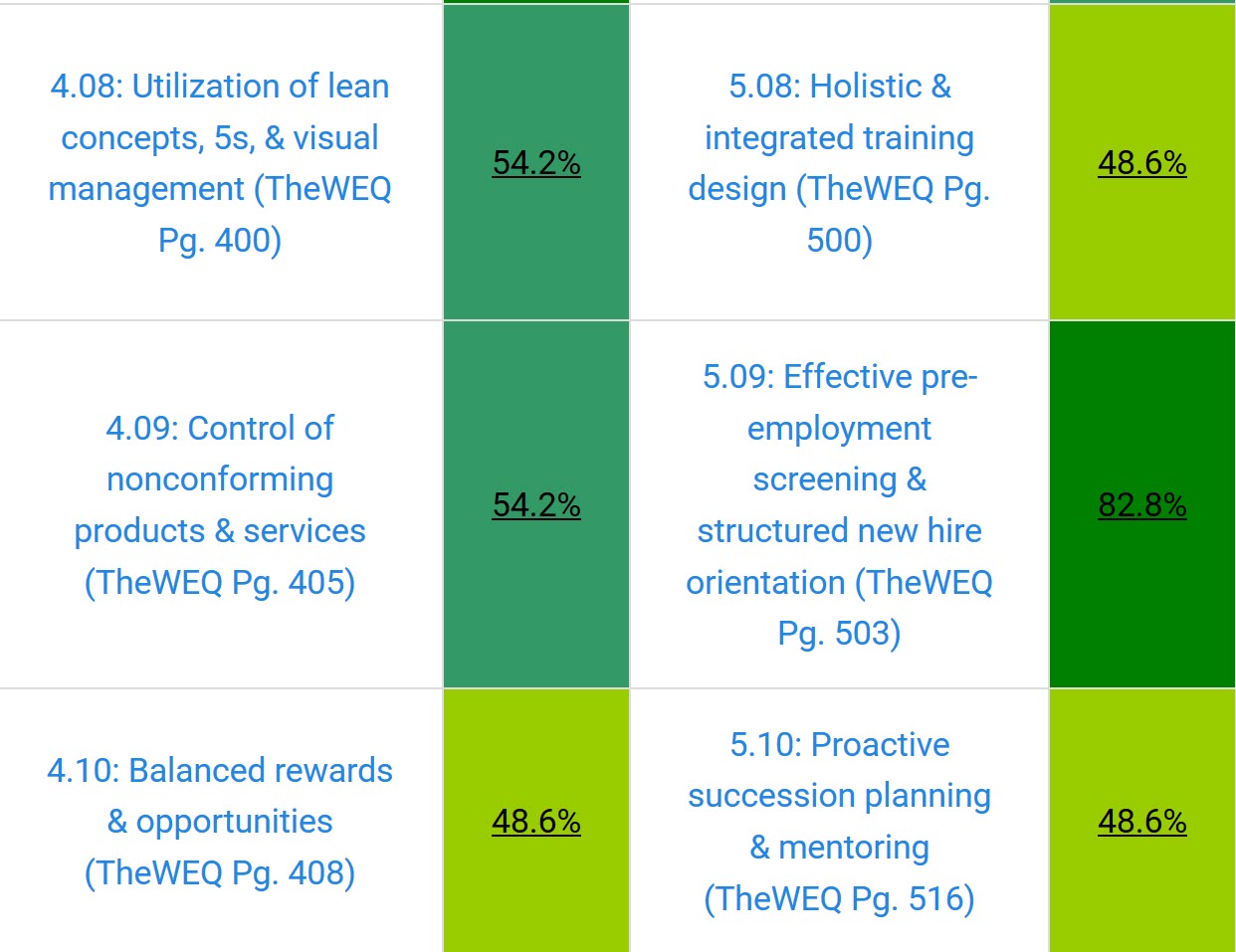 It's a good time to have a discussion with your team: